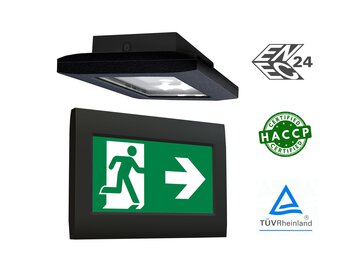 The emergency luminaires FMDS and the escape sign luminaires FMW have been certified by TÜV Rheinland. The granting of an ENEC certificate confirms the conformity of the tested product with the applicable European standards.

The FM lights are equipped with energy-saving and long-lasting LED illuminants. The rescue sign luminaire FMW has an exchangeable set of pictograms with a recognition range of 22m.

The luminaires of FM series comply with the requirements of food law as defined in Regulation (EC) No. 852/2004 (HACCP) Annex II Chapter I Number 2 a, b, Chapter II Number 1c in the field of luminaires at the time of the assessment. This was confirmed by a publicly appointed and sworn expert in the field of operating and product hygiene in the food sector.
Thus, the series complies with the requirements of food law and can be used in projects in this environment.

The FMDS safety luminaire enables luminaire spacing of up to 25m in the escape route with a mounting height of up to 12m and is therefore also ideally suited for industrial or warehouse halls. In addition, the FMDS has passed the test according to DIN 18032 and is ball-resistant.

Both lights are available as single-battery lights with a self-test function (1h, 3h or 8h autonomy time) or as a light for monitoring by a central battery system.

> More information on the FMDS luminaire

> More information on the FMW luminaire