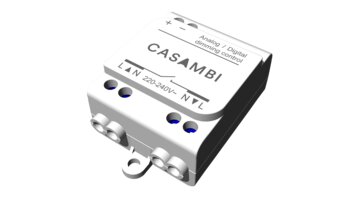 The CBU-ASD unit is a module that can be directly integrated into a luminaire in order to control it wirelessly. It is designed for halogen drivers of 0–10 V, 1–10 V and LED or even DALI dimmer interfaces. It is possible to configure the control output as a digital DALI dimmer interface on site or as an analogue interface.

The modules are controlled wirelessly using the CASAMBI® app for smartphone and tablet (via Bluetooth 4.0), though it is also possible to control them using light switches.

CASAMBI® CBU-ASD modules also give you the option of controlling a large number of luminaires from anywhere. This is made possible by a secure and wireless mesh network that automatically sets up the units. Set up requires neither repeaters or routers, nor wires or external gateways.